Pennsylvania is the Ninth State to Screen for Krabbe 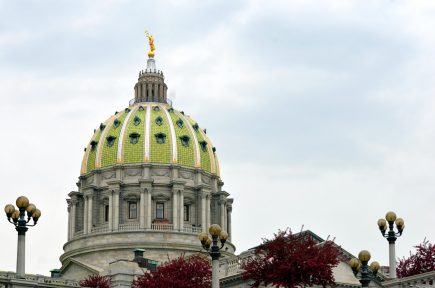 Pennsylvania is the Ninth State to Screen for Krabbe

It took seven years, four pieces of legislation (two of which were signed into law) from two different legislators, and two determined mothers to make today a reality: Pennsylvania is now screening all newborns for Krabbe.

In October 2014, “Hannah’s Law” (Act 148 of 2014) was signed by Governor Tom Corbett to add Krabbe to the Newborn Screening (NBS) panel in Pennsylvania after months of hard work by Hannah’s parents, Justin Ginion and Vicki Pizzullo. It was supposed to be implemented soon after, but by April 2016, when Lesa Brackbill began attending the Newborn Screening meetings, only one hospital was screening for Krabbe.

As Lesa and her husband, Brennan, learned more about the Newborn Screening program in Pennsylvania, it became apparent that there were larger issues preventing full implementation, and she set out with the help of legislative aides and the NBS advisory board to correct those issues, which would make Krabbe screening mandatory by default.

On November 25, 2020, Act 133 of 2020 was signed into law by Governor Tom Wolf, improving the Newborn Screening program, making PA compliant with the Recommended Uniform Screening Panel (RUSP), making screening equal from hospital to hospital, and officially adding Krabbe to the list of conditions.

It was through this five-year experience that Lesa learned five important lessons about how conditions should be added and how to best make that happen. Here are some of these lessons:

1 – Legislation is not always the best answer.

The common advice that has been given to leukodystrophy families over the years has been to talk to your legislator and have them introduce a bill to add the condition, but this bypasses – and is often disrespectful to – the NBS advisory board which has been created for a purpose, and it’s often the much more difficult route to take.

Only two states exclusively require legislation to add conditions (Colorado and Connecticut) – the rest go through the state’s NBS advisory board. That’s why we at LDNBS Action Network recommend that families get to know the board first and pursue legislation only if necessary.

2 – Sometimes there are larger issues to fix before adding a leukodystrophy is possible.

Over the past year Lesa has done extensive research on the Newborn Screening programs in all fifty states and D.C.:

“While I have so much more to learn, I feel much more prepared to help equip others to add leukodystrophies to the panels in their respective states because of this knowledge,” says Lesa.

“I’ve learned that some states can’t simply add conditions whenever they’d like to because they use another state’s lab for their blood-spot analysis; if that state isn’t screening for it, they can’t either (for example, New Mexico cannot implement Krabbe until Oregon does).

I’ve learned that some states have outdated equipment (and that equipment can cost $500,000 if it’s a tandem mass spectrometry machine), some need additional funding or staff to handle the new conditions, and sometimes, like Pennsylvania, the entire program needs to be evaluated and improved to reduce their limitations.”

It’s often more complicated than we realize and it’s easy to assume that they just don’t want to add it (though that is the case sometimes). They are (usually) not the enemy! Take the time to learn what those reasons are in your state and see what you can do to help.

3 – Be prepared for it to take much longer than you’d like.

Some states have started screening for X-ALD and Krabbe within a year of it being added, and other states are still waiting even though it’s been more than a decade in some cases.

Regulations can take a long time to change, and it can take many years for screening for a condition to be implemented. That’s why we often say that science moves faster than bureaucracy! Don’t give up hope. Stay in touch with decision-makers, and ask what you can do to help make this a reality.

Also note that some states will only add conditions that are on the Recommended Uniform Screening Panel (RUSP), and RUSP addition can take years. The RUSP is a collection of thoroughly vetted conditions that meet the medical and ethical requirements for screening and while many states are not yet RUSP-compliant, they respect the RUSP and do their best to screen for the conditions on that list. But RUSP addition doesn’t mean the journey is over: X-ALD was added in 2017 and less than half of the states are screening for it as of today. It still takes advocacy efforts!

This work is usually a marathon, and rarely a sprint. Adjusting our expectations accordingly is vital (something Lesa wishes she’d been told when beginning this journey).

As a parent of an affected child, for Lesa the waiting was extra difficult because she fully understood the reality of the disease. That knowledge led to increased passion and urgency because she didn’t want anyone else to endure all that her family faced. That passion is GREAT and it’s imperative for this work, but it’s important to not let that passion become anger at the system and the decision makers.

The experts are not against you; they are likely just not as informed about the disease, treatment, etc. as you are. They also better understand the state’s financial situation and the needs far better than we do.

When Lesa first began lobbying for the board to add Krabbe, they were using outdated research; she spoke up in the meetings to refute what they were saying, but the medical world relies on published research – so she had to wait for what she already knew to be true to be published. Once the papers came out, Lesa forwarded them to the members of the advisory board and continued to educate in that way. Now they see the benefit of screening for Krabbe and they have worked hard to make this implementation possible. Pennsylvania now includes Krabbe on its Newborn Screening panel, but it took years, and lots of patience. Now we have a great number of published papers to support our argument that Krabbe should be on the screening panels – our job is to make sure that the decision-makers see them.

Know your disease, know your state, know your story. Learn as much as possible about your state’s Newborn Screening program and look for creative ways to make a difference.

5 – Work with other leukodystrophy families if at all possible.

Sadly, Pennsylvania has many Krabbe families, but that also made it more compelling as they spoke with their legislators across the state and asked for their support. It was more than just Lesa talking to legislators – other Krabbe families were sharing their stories, too. Our stories are what drive our mission, and the more stories the better.

Work together and learn from one another as much as possible. We have to come together – as organizations and as individuals – to make these dreams a reality, and LDNBS Action Network is here to help!

Stay tuned as we will be releasing our membership page soon!  We want everyone who’s interested in getting involved to be part of our network.  Let’s work together to make progress in leukodystrophy newborn screening.